Tisbury has a new skatepark

Tisbury has a new skatepark. The £105,000 state-of-the-art facility was opened by Pam Chave, former Tisbury Parish Councillor joined by local resident Jonathan Jones who as a youngster, pitched Pam the idea of building a new community skatepark.

The village’s new hotspot has a 1.2m Whippy quarter pipe, sloped wall-ride, pocket-to-pocket jump box and Matterhorn roller-coaster escalator, and is a big hit with Tisbury’s teen scene. Local skateboarders and scooter riders from across the village were on site to try-out the challenging concrete skate bowl between Nadder Leisure Centre and the village swimming pool on the King George V Playing Field. 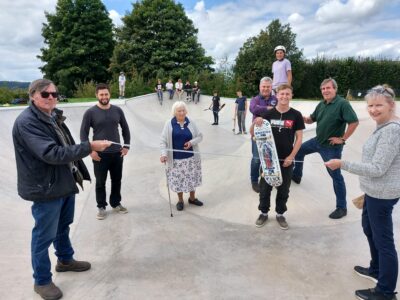 “I’m really happy they built it, it’s good fun and a great way to keep fit,” said Ben Phillips, 16. “It’s an awesome community space with a great design which works for all skills levels whether you’re a beginner like me, or an advanced rider,” added Maisie Camp-Sorensen, 14.

Tisbury Youth Club worked with Parish Clerk, Sandra Harry, the parish council and a working group of older, experienced skatepark users from the village to help design the scheme. The project was also supported by a community engagement forum of local young people who gave the project team a good understanding of what the community wanted.

“We’re grateful to Pam who championed the project during her time as a Tisbury Parish Councillor and Jonathan, who got the ball rolling 10 years ago when he knocked on her door as a youngster and asked her to take up the cause,” says Cllr Gerry Murray. “The Parish Council has listened to the local riders and everyone involved should be very proud of the end result.” 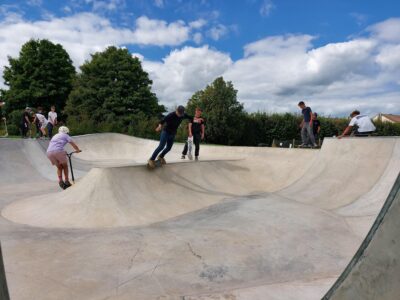 Tisbury’s new SK8park is proving to be a big hit with Tisbury’s teen scene.