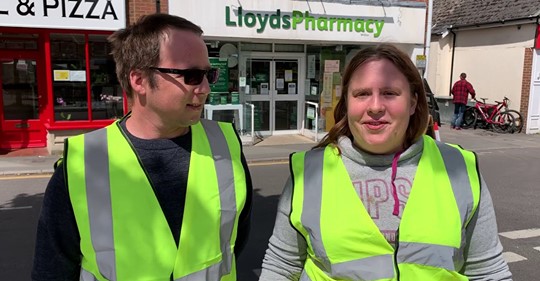 Wilton town’s community rallied round to support vulnerable and isolated pensioners and people with disabilities through the pandemic.

A network of volunteers has been grant-aided by Wiltshire Community Foundation.

The £2,600 grant from the foundation’s Coronavirus Response Fund gave a boost to the town’s HELP response group and its 118 volunteers who deliver shopping, collect prescriptions, run errands and provide comfort and reassurance over the phone.

The group was initially a handful of volunteers but as the crisis deepened and the calls for assistance increased, it forged a partnership with Wilton Town Council.

Clerk Steve Milton said: “They had been taking calls on their own phones, which wasn’t really ideal, so we subscribed to a call centre software package to handle calls from residents. Part of the Wiltshire Community Foundation grant has enabled us to extend the subscription and that has been a real relief.

“We sent out leaflets to advertise the new service and increased the number of volunteers. We now have 101 registered volunteers and 118 in total working with us. Since we launched on March 30, we’ve logged 1,011 calls, which led to 955 completed tasks. Of those, 524 were delivery of prescriptions, 309 were for shopping trips and 97 were running errands, such as returning library books or posting letters. We also have 21 people registered for regular reassurance calls.” 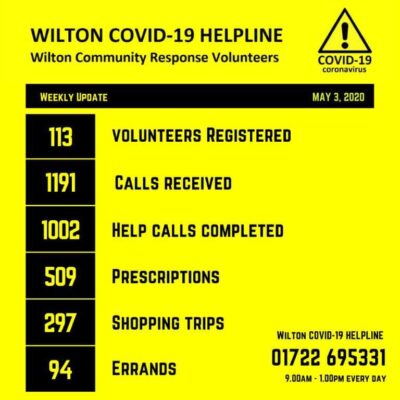 The group has been working alongside Wiltshire Council, local GPs and the chemist, Lloyds. Mr Milton added: “We have a batch system for collecting and delivering meds and it has been a Godsend for the chemist as they had huge queues.

“The funding will help because we use PPE in a limited way when delivering shopping to people showing symptoms or have disabilities. The funding will enable us to make sure all of our volunteers are fully protected, and that will keep everybody safe, not just our volunteers but the people they are visiting.”

He has been amazed at the dedication of the volunteers – and the response from the people of the town. “Our volunteers have been incredible but so have the public. I had one lady, who has been having her shopping delivered, ring up to say she had ordered and extra shop to give to people who needed it. Because she has been isolating herself, she felt dreadful that she couldn’t help. When we went to collect the order, there were 12 bags of food. It was just such a lovely act of kindness.

“One lady on the phone was quite distressed and the volunteer who spoke to her, completely off her own bat, bought her a bouquet of flowers and took them round: the lady was in tears.”

Emily and Craig’s on what would have been their wedding day (thank to Wilton Community Chat for the pic)! Instead were busy helping their “neighbours” in Wilton and hoping for an autumn wedding instead. Today a prayer for them and anyone whose plans are now “on hold”..