A local auction house is calling on the public’s help to trace the origins of a large Roman marble slab which turned up in a garden on the Hampshire/Wiltshire border.

The weighty rock was unearthed from a garden rockery in Whiteparish about 20 years ago and was used for almost 10 years as a mounting block in the owner’s stable, before she one day noticed a laurel wreath carved into its surface. An archaeologist then identified it as dating to the 2nd century AD with probable origins to Greece or Asia Minor. 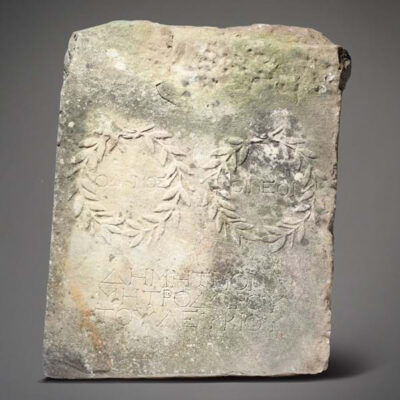 “Artefacts of this type often came into England as the result of Grand Tours in the late 18th and 19th century, when wealthy aristocrats would tour Europe learning about Classical art and culture,” explained Antiquities specialist Will Hobbs at Woolley and Wallis. “We assume that is how it entered the UK, but what is a complete mystery is how it ended up in a domestic garden, and that’s where we’d like the public’s help.”

The bungalow on Common Road, Whiteparish was one of several built in the mid 1960s and the auctioneers are hoping someone who perhaps lived in the area at the time, or who worked on the construction, might recall the origins of some of the rubble used.

“There are several possibilities of where the stone might have originated. Both Cowesfield House and Broxmore House were very close to Whiteparish and were demolished in 1949 after having been requisitioned by the Army during the war. But we also know that the house at what is now Paulton’s Park was destroyed by fire in 1963 and so possibly rubble from there was re-used at building sites in the area shortly afterwards.”