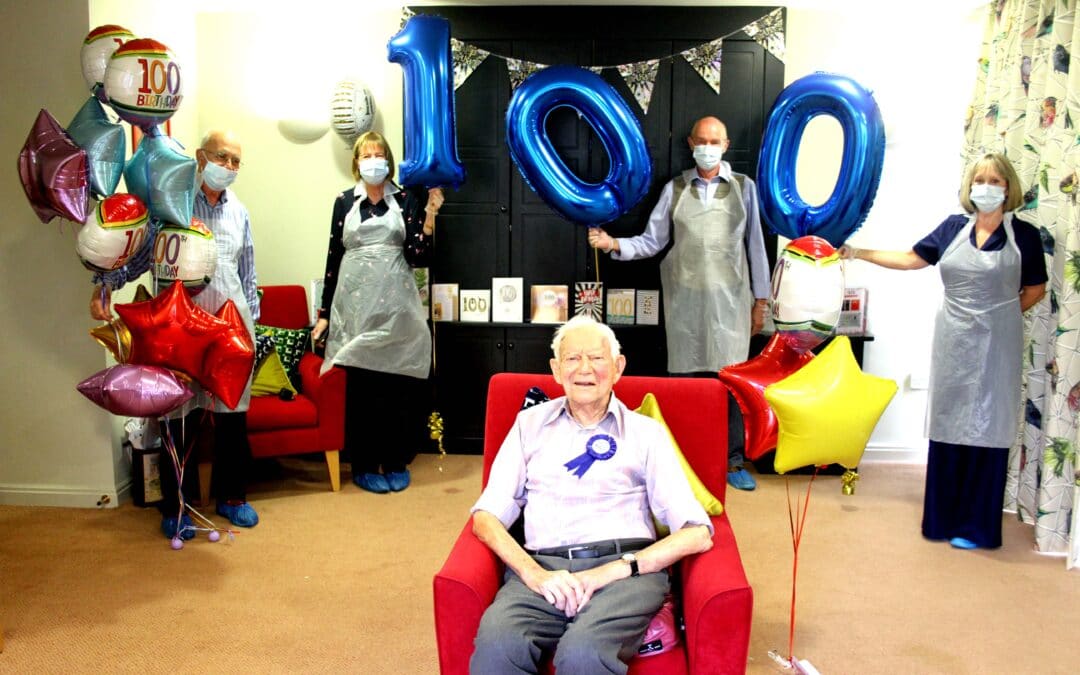 Care home staff worked behind the scenes with the family of a resident to ensure his socially-distanced 100th birthday was full of pleasant surprises.

As he left his bedroom after checking through dozens of cards and video greetings, while eating his breakfast, he was met with a giant banner opposite featuring his smiling face.

Staff sang ‘Happy Birthday’ en masse in the garden, before six members of a luncheon club Frank attends in his nearby village, Marnhull, serenaded him from just outside the front door.

While Frank was on a Skype call with his granddaughter Bethany in Australia, four other family members were secretly ushered into the rear of Newstone House and kitted out in full PPE. 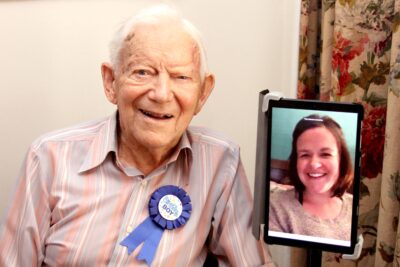 As Frank entered the home’s cinema room, he was greeted by the sight of his son Clive, daughter Helen, and their partners, sitting two metres apart and preparing to raise a toast to him, wearing facemasks, aprons, gloves and shoe covers, all carefully considered from an infection control point of view.

The family enjoyed a two-hour-long party with bubbly, stout and cake, as Londoner Frank opened cards from the Queen and Fulham FC, the local club where he saw his first match aged eight in 1928, and has supported ever since. 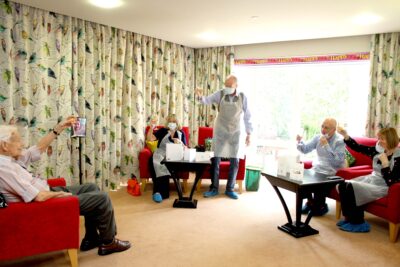 Frank, who has lived at Newstone House for more than three years, was a Staff Sergeant in the Royal Signals during World War Two. He served in North Africa and Italy and was twice mentioned in dispatches for his bravery.

In civilian life, he was a manager at the Gas Light and Coke Company which later became North Thames Gas. He played a major part in the migration of large swathes of north and west London to North Sea gas in the late 1960s and 70s.

After his retirement in 1980, he and his late wife Joan moved to Marnhull where they nurtured their love of gardening and Frank spent time watching many cricket matches and continuing to follow football.

“We are extremely proud of him reaching 100 years old,” said Clive. “He has always been there for us, a constant in our lives. He’s not one to show a lot of emotion but he had a huge grin from ear to ear during his birthday and he hasn’t stopped talking about it, so we know he enjoyed it.”

Clive added: “We can’t thank the staff enough for all the hard work they put in to make the day such a celebration, especially when you think of all the current restrictions they face. They were absolutely brilliant. We are so happy that dad is at Newstone. The home deserves the highest praise.” 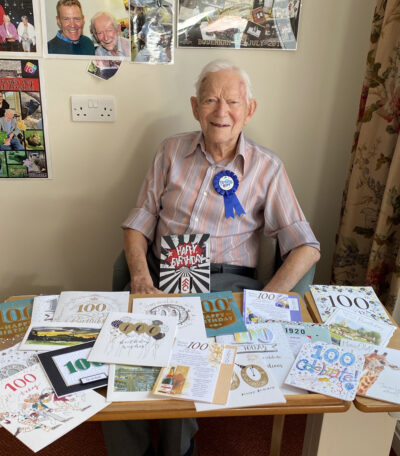 Rebekah Goddard from the home’s Companionship Team, said: “We were thrilled to make it possible for Frank and his son and daughter to be together for his ‘party of the century’, even if it was social distanced and people had to wear PPE. Judging by the smiles all round, it was well worth it for Frank and the family.”

On receiving the gift of his blanket, Frank told the assembled staff: “I thank you from the bottom of my heart for what you do for me, and a lot of other people as well. We are all very grateful for what you do.”