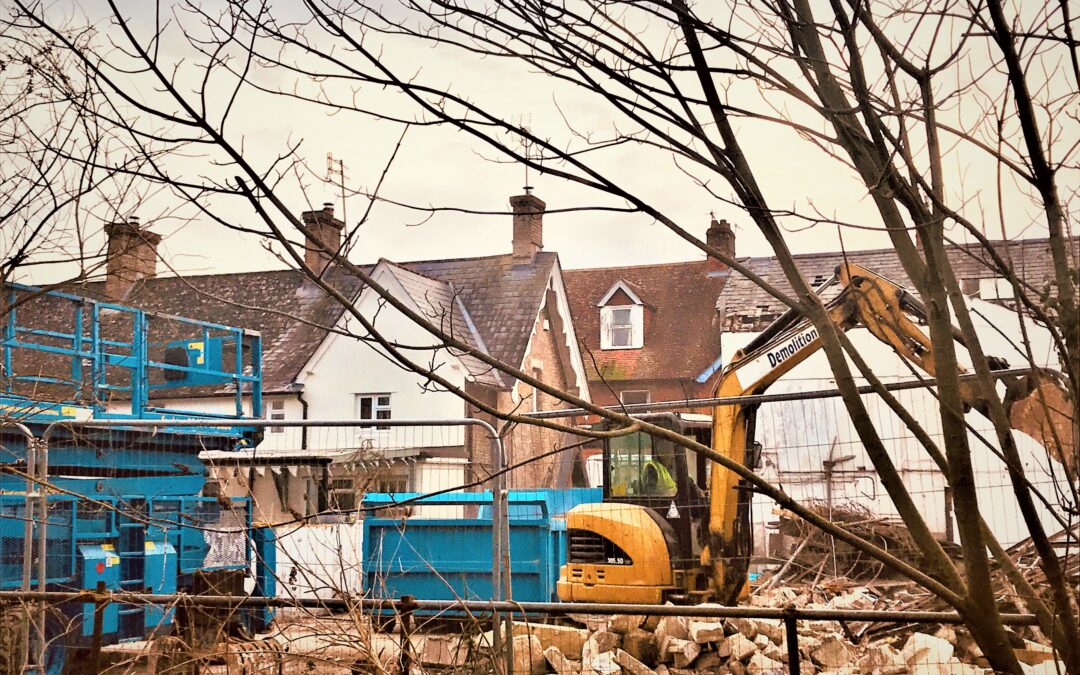 A controversial disused building in North Street, Wilton, has been demolished after many years of complaints.

Now, residents, shoppers and visitors will be anxious to see what is proposed for the large factory site behind the exisiting houses and shops and offices in North Street.

Eleanor King, Associate Planning at Savills, the agents for the site, said: “A small amount of demolition commenced at the site on March 8. This is related solely to the building behind the former Coachworks (51/53 North Street) for safety reasons. The two factories at the site, Wallgate and Naish Felts, continue to operate.

“A detailed design and landscaping of the proposals is being prepared by Bellway Homes and E V Naish Ltd to be lodged with Wiltshire Council shortly. The council will notify local residents of the consultation process in due course.

“The detailed proposals have taken on board comments with specific amendments proposed as a result. Other small amendments are proposed, developed through a pre-application process with Wiltshire Council. March was slightly alarming for residents close to Castle Lane when barricades were erected around the coachworks, demolition signs put up and large equipment arrived. The buzz was the development of 63 houses at Naish Felts Ltd and Wallgate, Crow Lane, was going ahead, and the coachworks demolished to allow trucks through to the site.”

Geoff Naish, owner of both factories and land, talked to New Valley News. “We have a new factory at High Post but the work is not starting until the end of 2021,” Mr Naish said. “So, it will be a couple of years before the new development begins in Wilton. The demolition has started as the building is deemed to be unsafe. It has cracks appearing and cracks only get bigger.”

Wilton Town Councillor Peter Edge added: “The bridge on Castle Lane needs to be strengthened for future traffic. The ash tree on the right will be remaining as it falls on land that is under dispute. The Coachworks on the corner of the road had to be taken down as Castle Lane needs to be widened. It is to be replaced with a narrower building, housing flats and two shop windows.

“The shops will be excellent for Wilton and encourage residents and visitors to walk to Wilton Shopping Village.”

Eleanor King confirmed the bridge strengthening and demolishing the Coachworks: “it is not possible to say quite when this will happen as it depends on the timing of the reserved matters/detailed design consent and then next steps such as discharging relevant planning conditions.”

What are the factories?

The two successful businesses in the heart of the small town of Wilton are Naish Felts started in 1800, when William Naish began a textile business, manufacturing and supplying wool corduroy to the local farming community. They moved on to producing piano hammers, diversifying in 1994 to supplying numerous “Tier 1” manufacturers such as Volkswagen (VW, Audi, Skoda), with armrests, headrest, covers, seats, door instrument panel trim products, with fabric, leather and PVD covers. They are also experts in producing technical felts: needle and pressed felt.

Wallgate, part of the Naish group, has 40 year’s in the design and manufacture of robust washroom solutions, started in 1975 when the felt business was struggling. The company began with the invention and installation of the first all-in-one hand wash dryer in the UK and is now one of the leading manufacturers in robust, innovative and efficient washroom sand sanitaryware solutions.