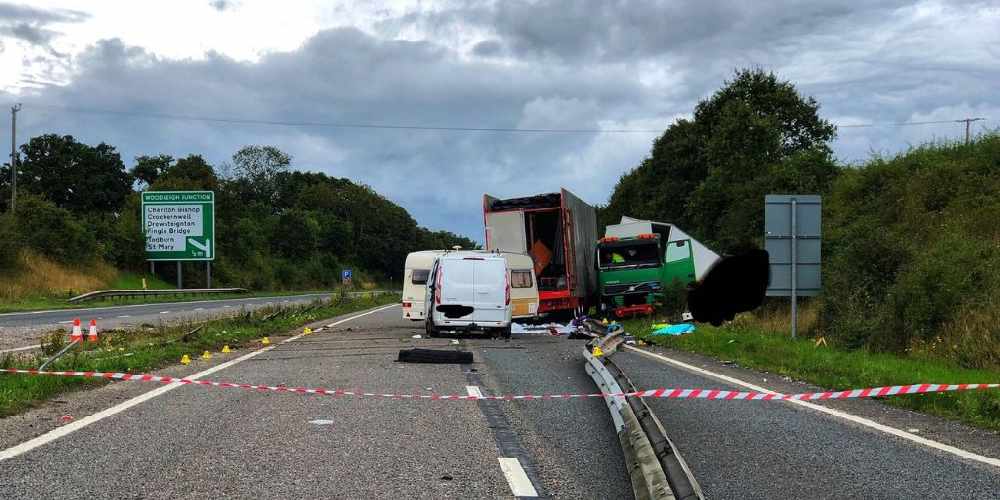 A fairground ride operator from Amesbury was jailed after his death-trap lorry crashed and left two motorists with life-changing injuries.

Lee Matthews was towing a fairground ride and a caravan when a defective front tyre blew out as he headed towards Cornwall on the A30 dual carriageway near Okehampton. The lorry jack knifed and his whole 33.5-ton combination of vehicles ploughed through the central reservation and hit cars travelling on the opposite carriageway.

A Ford Ka was squashed and forced six feet up a bank and the driver, Rebecca Baker, was left with the roof crushed against her head. She was rescued by a brave passer-by, Billy Dommett, who crawled into the wreckage, wedged himself into the passenger seat, and used his leg to force the roof upwards. He then staunched the flow of blood from a serious wound to her abdomen until an off-duty doctor arrived and took over. She was airlifted to hospital with a bleed on the brain and three broken bones in her back, needed specialist care in a neurosurgery unit, and spent just under a month in hospital.

Another car driver thought she was going to die as the lorry headed straight towards her but she escaped with neck injuries after it hit her side-on.

The tyre which blew out was more than 20 years old and was obviously in a dangerous condition. There were no brakes on the fairground ride or caravan and a 1.25-ton generator fell onto the road. The fuel tank was empty and its pipe connected to a second tank containing illegal red diesel. None of the vehicles had an MoT test because of a special exemption applied to members of the Showman’s Guild.

The crashing vehicles ripped a 250-metre gap in the central reservation and caused travel chaos in August bank holiday week in 2019.

Matthews, aged 50, has been a fairground operator all his life and was jailed after a Judge at Exeter Crown Court said he had put cost cutting ahead of safety. He suffered a broken leg in the crash in which he was thrown 15m from the cab because he wasn’t wearing a seat belt. 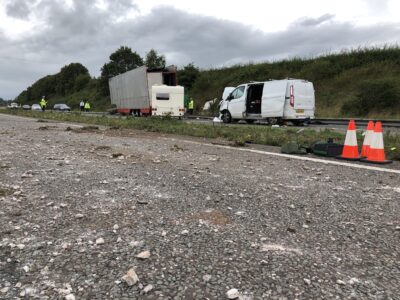 Matthews, of Porton Road, Amesbury, admitted causing serious injury by dangerous driving and was jailed for eight months and banned from driving for three years by Judge Peter Johnson. He also ordered the confiscation of the Volvo truck Matthews was driving and made a formal commendation to rescuer Mr Dommett. The judge told Matthews: “What you were driving was a disaster waiting to happen. It was a large vehicle towing a heavy load and was in a highly dangerous condition.”

Miss Heather Hope, prosecuting, said the accident happened at 7.30 am on August 28, 2019, when a front tyre blew out as Matthews was heading East towards Newquay where he was due to join a bank holiday funfair. He was going up a hill at about 40 mph and the whole combination of vehicles went through the central reservation, taking with it a Transit van which had been overtaking. There was a sideways impact on a Renault Megane and Ms Baker’s Ka was then crushed and forced up the bank. The tyre which blew out had been made in 1998 and had been in use for 20 years. It had visible cracking which would be obvious to any driver who carried out basic checks. The fuel tank had been by-passed and the line connected to a second tank hidden under a tarpaulin which contained red diesel.

Matthews was seen in hospital by police and told them: ‘I had a blow-out in my front tyre, am I the only person in England to have a blow-out today?’

Mr Lee Bremridge, defending, said Matthews is remorseful and wanted to apologise to the victims. He has run his fairground business all his life with a perfect safety record. His business would be at risk of folding if he were sent to jail immediately.